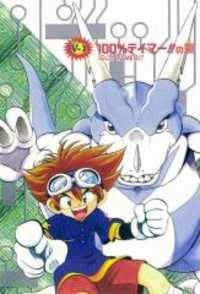 From Animag V-Tamer is a manga version of Digimon that was never really released in English, but various sites have talented people who have actually posted a translated version of this great series. Based on the original Digimon V-pets, V-Tamer certainly brings a whole new twist on the world of Digimon. It opens with Taichi, the main character of the series, attempting to enter a tournment with his V-pet, only to be disqualified because the monster on his V-pet cannot be identified and therefore was not a Digimon that was supposed to be programmed into the V-pet. A short time later, Taichi finds himself in the Digital World and meets up with his Digimon, Zeromaru, or just Zero for short. Zero is a V-dramon (Veedramon), and between himself and Taichi, they have a battle record of 100%. For this reason, the two of them were chosen by Holy Angemon to save the Digital World from the supreme evil, Arca Demon. With the help of their guide, Gabo, Taichi and Zero set off to defend the Digital World from Arca Demon.
Subscribe Chapter list